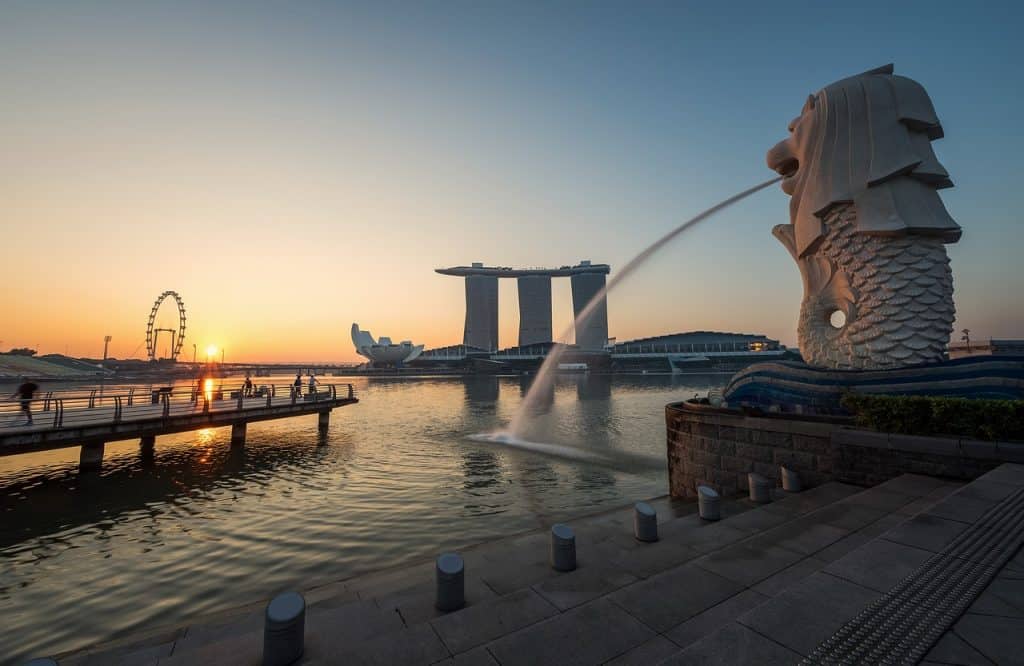 If there is one word that best captures Singapore, it is “unique”. A dynamic city rich in contrast and color, you’ll find a harmonious blend of culture, cuisine, arts and architecture here. Brimming with unbridled energy, this little dynamo in Southeast Asia embodies the finest of both East and West. The Muslim centre of Singapore is a traditional textile district, full of batiks from Indonesia, silks, sarongs and shirts. Add to this mix rosaries, flower essences, hajj caps, songkok hats, basketware and rattan goods, and you have a fair idea of the products haggled over in this part of the city.

With its gleaming high rise buildings, Singapore is one of the most modern cities in Asia due to its economic success. It also makes great efforts to make itself presentable and beautiful. On the trip from the international airport to the city center, it can be noticed that the bridges passing over the main highway are covered with orchards and flowers. This is something that one doesn’t see often anywhere else in the world. The city center itself is well designed with the Singapore river running through it. River cruises are available to take in the local sights from the water. There are numerous outdoor cafes, restaurants and shops along side the river which makes for a pleasant stroll. Because of the hot temperatures here since Singapore is pretty well on the equator line, the city can feel like a giant sauna. So extended walks are suggested in the early mornings, late afternoons or evenings when things get a bit more comfortable rather than in the midday hear.

The grand Sultan Mosque is the biggest and liveliest mosque in Singapore, but the tiny Malabar Muslim Jama-ath Mosque is the most beautiful. There’s fine Indian Muslim food along nearby North Bridge Rd and the foodstalls on Bussorah St are especially atmospheric at dusk during Ramadan.

For horticulture enthusiasts, Singapore is a gold mine where there are world class gardens including the Singapore Botanic Gardens as well as the Chinese and Japanese Gardens. For nature lovers, there are some interesting attractions including the Jurong Bird Park, Jurong Reptile Park, Singapore Crocidilarium, Singapore Zoological Gardens and the very unique Night Safari which is open only during evenings. Sentosa is a small resort island south of the city with a scenic cable car, an aquarium and some nice beaches.

Orchard Road
For shopping, Orchard Road is the ideal place to spend a day there. The bustling shopping centres sells everything from the most fashionable and outrageous shoes and clothes to precious gems, eyewear and accessories. And when the shopping gets a little exhausting, revitalize yourself at one of the many restaurants and eating outlets.

Singapore with its mixed population including Chinese (77%), Malay (14%) and Indian (7%) is a case study in multiculturalism. Everyone here lives and works together in harmony. Only in Singapore can one see a Buddhist temple, a Hindu temple and an Islamic mosque all in close proximity to each other. The country has four official languages being English, Mandarin, Malay and Tamil. One of the great advantages of such a multiracial scene is that there are different ethnic neighborhoods to check out including Chinatown, Little India and Arab Street. All have their own distinct flavors in little shops, markets and cuisine. In addition to restaurants, there are outdoor food vendors which serve very low priced meals so one can dine well at any budget level.

In addition to the modern skyline and the contrasting ethnic temples, there is still some wonderful colonial architecture including the famous Raffles Hotel where the Singapore Sling was originally invented. If one wishes to stay indoors during the hot midday sun, there are several museums including the National Museum to take in. Singapore has some Asian theme parks such as Tang Dynasty City which is a recreation of life during 7th century China and Haw ParVilla Tiger Balm Gardens which has colorful statues depicting Chinese mythology. High end boutique shopping for fashion and electronics will be concentrated on or near Orchard Street.

It is a good idea to take a quick organized city tour to get an overview of what Singapore has to offer. Then tourists can easily take advantage of the very efficient bus and subway system known as Mass Rapid Transit (MRT) to go pretty well anywhere on the island for selected sights of interest. A nice thing about Singapore is that it is pretty compact and easy to get around. It won’t take long to see all the sights and attractions one would be interested in so even a few days is all that would be required. Singapore would be the much needed change of pace within a longer hectic southeast Asian tour.