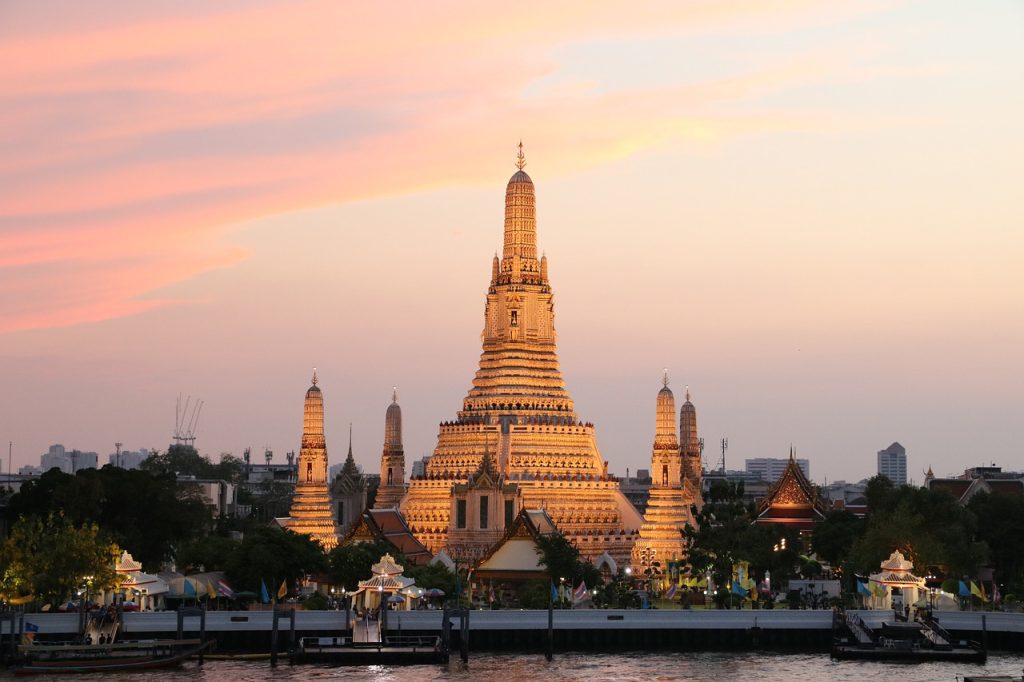 Bangkok, official name Krung Thep Maha Nakhon, is the capital of Thailand and, with a population of over eleven million inhabitants, by far its largest city. Its high-rise buildings, heavy traffic congestion, intense heat and naughty nightlife may not immediately give you the best impression — but don’t let that mislead you. It is one of Asia’s most cosmopolitan cities with magnificent temples and palaces, authentic canals, busy markets and a vibrant nightlife that has something for everyone.
Bangkok is a great place to be where you can relax, shopping and sightseeing.

Bangkok welcomes more visitors than any other city in the world and it doesn’t take long to realise why. This city is a true tourist paradise. Bangkok is a great city with many action at every turn. Marvel at the gleaming temples, catch a tuk tuk along the bustling Chinatown or take a longtail boat through floating markets. Food is another Bangkok highlight, from local dishes served at humble street stalls to haute cuisine at romantic rooftop restaurants.

Bangkok is located in central Thailand along the Chao Phraya River. Most visitors to Thailand travel by air though travelers in neighboring countries can reach Bangkok by bus, rail, or boat.
Besides the city itself, Bangkok is also surrounded by many interesting provinces worth visiting.
The culinary exploits of the Thai people is unrivalled in the Southeast Asia. From jasmine rice to Pad Thai dishes, you will be treated to the best food you can find in Southeast Asia.

Bangkok is a huge and modern city humming with nightlife and fervour. Administratively, it is split up into 50 districts (เขต khet), which are further split into 169 subdistricts (แขวง khwaeng), but these are more often used in official business and for addresses. Visitors will find the conceptual division below of the main areas more useful for getting around.

Climate:
According to the World Meteorological Organization, Bangkok is one of the hottest cities in the world. Located just 14 degrees north of the Equator, Bangkok is warm at any time of the year with temperatures over 30°C (86°F).  The most pleasant time to visit is the cool season that lasts from November till February. It is both the coolest and driest period — the Emerald Buddha statue in Wat Phra Kaew even wears a scarf during this period! Don’t think that’s necessary though — daytime temperatures still hover around 30°C (86°F), but it does cool down into the lower 20’s as it gets dark (lower 70’s °F). March and April represent the hot season, and hot it is — 35°C (95°F) on average, but don’t be surprised to see temperatures rising towards 40 degrees Celsius (around 100°F+). This is the worst season to visit Bangkok, so plan a lot of air-conditioned shopping mall visits and get a hotel with a swimming pool. Then there’s the wet season that runs from May till October. Expect massive downpours resulting in floods all over the city, and spells of thunder at times. It’s not all bad though — the afternoon showers are actually a pleasant way to cool down from the heat, and while they may last all day, usually they’re over within an hour. Extreme rainfall happens in September and October, so these months are best avoided.
Whatever season you’re visiting, don’t take the weather lightly — temple-tramping in the scorching afternoon sun can be a challenge, so come well-prepared.

Dress lightly for the weather, but keep in mind that some palaces and all temples (notably the Grand Palace) have a strict dress code. Also be sure, and this cannot be said enough, drink enough fluids! You don’t have a reason not to, as 7-Elevens and other convenience stores are abundant in Bangkok and they sell cooled beverages for as little as 10 baht. Locals get their water from “reverse osmosis” purified water machines that fill up a one litre bottle for one baht.

Bangkok International Airport  (BKK) is the major gateway to all of Thailand. Located about 24 kilometers (15 miles) north of Bangkok, the airport is served by more than 65 airlines.  At 132.2 meters, the Bangkok’s Don Mueang International Airport features the world’s tallest aircraft control tower. 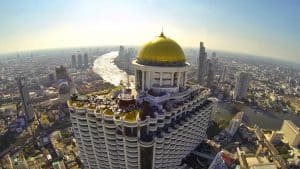 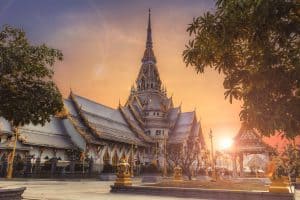 In BUSINESS CLASS from Norway to Thailand from only €1,542 (round-trip)